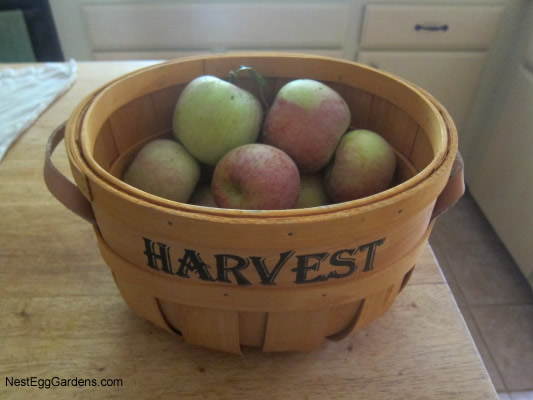 The Fuji apple tree did very well this year, bearing tons of fruit, which we’re just starting to pick. Used a lot of gray water to irrigate it this year because of the drought. Planted scented geraniums underneath it a couple of years ago to deter the codling moths, and it looks like only 10-20% worm damage. The wormy apples end up going to the deer, so it’s all good.

When you live in a rural area and like to watch animals, you become aware of the predator prey connection pretty quickly. It’s not pretty, but in nature, animals eat each other. And to be honest some predators are our favorites (owls and hawks). We understand there’s a balance in life and nothing lives forever. I’ve been thinking about it recently, because we’ve just had three such events (isn’t there a proverb that bad things or death happens in threes?):

1) A few days ago, a commotion out front that sounded like a bunch of crows bullying somebody, caught my attention. As I looked away from the squawking crows, towards the unusual scream was coming from the pine tree, a big hawk flew away with a squirrel!  Whoa! That was a first! I’ve often wondered why the hawks don’t pick off the squirrels when they walk along the utility lines. I like to watch the squirrels, and don’t wish them harm but lately their antics (e.g., eating all my Fuji apples and sunflower heads), had me feeling like I needed fewer of them to watch. But it was pretty sad when the captured squirrel’s buddy called to him for almost an hour before finally leaving the scene of the crime.

2) Friday night at dusk, we watched as a deer darted out of the way when a neighbor drove home. More wary than usual, a doe and one fawn slowly made their way across the street. This year our local doe had twins, and I wondered if this could be a different mother or did something happened? We heard coyotes yipping during the night and the next morning a large one was seen across the canyon. A neighbor down the road told us that one of the twins had gotten its head caught while jumping a fence and broke its neck. The coyotes had found the buried carcass.

3)  All day Saturday, vultures swooped low over the yard and battled the breeze to make their descent across the street. They were attracted by an old orange feral tomcat that had finally given up and died. He used to be tough, but old age and disease had taken its toll. Poor thing had been so sick sitting in front of the water bowl outside, stomach swollen and miserable. It’s good that he’s no longer suffering.

The first bowl of fresh picked green beans were delicious, along with zucchini and yellow summer squash harvested today.  We have mulched with straw to conserve moisture and planted a few sunflowers in the safety of the raised bed. Surrounding the garden with poles and hanging bird netting has proven to be a excellent way to keep the deer from using the garden as their personal salad bar. Clothespins weigh down the netting and it’s easily flipped over the top to get in for weeding/watering, etc. The already 5+ foot sunflowers will provide filtered shade for half the day, which helps keep the lettuce from bolting. They are the ‘Kong’ variety… and we think they are going to be huge!

The neighborhood doe and her twin fawns are bold enough to come up the walkway right under the living room window in broad daylight. But they don’t go near the fallen apples in the background. Maybe the hanging shirt and chairs around the Fuji apple tree really are keeping them away.

The garden back in Mid-June before the last of the broccoli was harvested. Put in green beans, sunflowers, and lots more lettuce, spinach and kale. That’s Rose the cat in the background and the patriotic shirt hanging from the tree serves as both decoration and a deer deterrent.