Forcing bulbs in the winter is something I’ve been doing for 30+ years, but this is the first time I’ve had three Amaryllis blooms at the exact same time. I am so in love with the color red lately!!

Also known as Belladonna Lily or Belladonna Amaryllis, We’re amazed at how these fragrant, deer resistant flowers rise out of bare hard dirt every July. The mound of leaves that grew during the winter (when everything was green) died back a long time ago without any water. It’s been four months since we’ve had rain here on the central coast of California. So, it’s such a nice surprise in the middle of the dry season, to see the strong, leafless stalks rise up with flowers that bloom for weeks. They come back year after year, the bulb multiplying underground, and sometimes sprouting by seed. This was one bulb… it now has 16 stalks coming up. 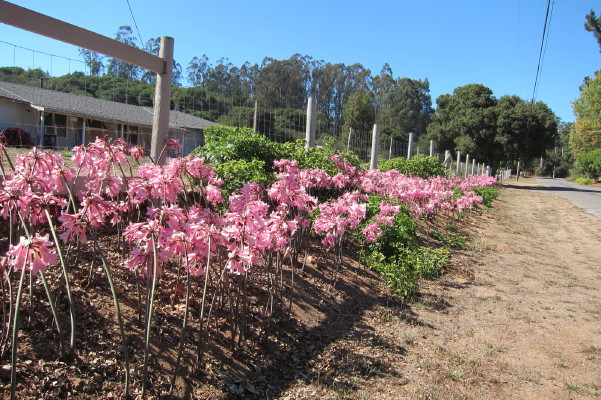